Neurofeedback is a form of Biofeedback.  Instead of giving feedback when the Skin Temperature is rising or Skin Conductivity is falling, feedback is given when a desired brainwave state is achieved.  Let me illustrate with some examples.

In Attention Deficit Hyperactivity Disorder or Learning Disabilities, there is typically an abnormal slowing of the brainwaves, as seen in this example:

When the brainwaves slow to such an extent, the person loses their focus and either gets distracted or goes into a daydream.  With Neurofeedback, we can simply give feedback when the brainwaves are normal and through practice, it becomes the new norm.  the brain also adapts by actually growing new brain cells and forming new connections, so the results are permanent.

Anxiety can take different forms and can have different causes.  Some anxiety is clearly learned from an anxious and fearful parent or from a traumatic childhood.  Other types of Anxiety are brain based.  In one type of brain based Anxiety, it is caused by the brain getting out of its natural rhythm or being stuck in a dysfunctional state.  For that type, we use a special form of Neurofeedback called LENS Neurofeedback.

Case Example:  The young man and his mother had visited two inpatient psychiatric facilities and had an appointment at a third because of disabling anxiety with associated suicidal ideation.  I suggested he try LENS Neurofeedback.  After one brief session, he was calmer and mother called twice later that afternoon and evening expressing her astonishment at how much calmer he was.  He continued LENS Neurofeedback and Psychotherapy and did not require hospitalization.

The more common types of brain-based Anxiety are characterized by abnormally fast brain waves and clearly seen on the Brain Map.  As with ADHD and LD, in such cases, we can target that area of the brain and give feedback when it is functionally normal.  Then it is just a matter of sufficient practice learning relaxation and sufficient Neurofeedback to bring about a permanent change.

Although the common and accepted treatment for depression is Antidepressant medication, the effectiveness of medication is not as great as you might think, and there are significant side effects.  Another treatment method, which has been used for years, is Neurofeedback or Brainwave Biofeedback.  As discussed under the Depression topic elsewhere on this website, Depression can be psychological, situational, or biological.  It is well known that some Depression is associated with under-activity in the left front part of the brain.  Transcranial Magnetic Stimulation or TMS is one way to try to activate this part of the brain.  Neurofeedback is a simpler, less expensive treatment, without the side effects of TMS.

On the Brain Map, it is easy for us to see if the left front of the brain is underactive relative to the right front.  If that is the case, we can easily target that area of the brain and give feedback when it is more active.  And again, because the brain is Neuroplastic, it will respond to that stimulation by growing new brain cells and forming new connections, resulting in permanent change.  On the other hand, if that area is not underactive, then neither TMS nor Neurofeedback is going to make a difference.  We can therefore use the Brain Map to help us determine ahead of time the treatment, which is most likely to help, thus saving you time and money. 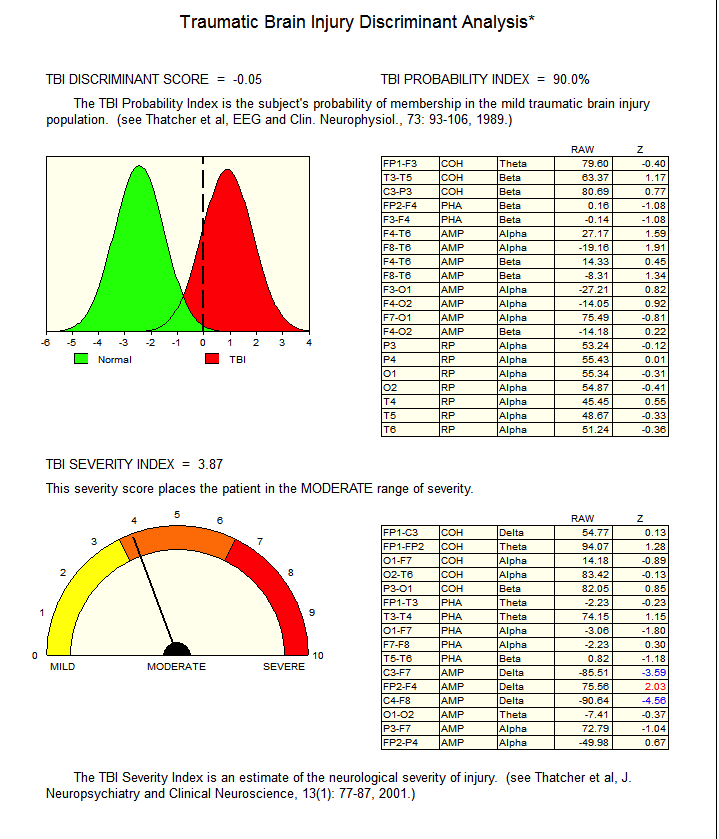 Traumatic Brain Injury or TBI has been a big problem for soldiers returning from Iraq and Afghanistan, due to the concussive effects of a nearby explosion.  The sometimes debilitating effects of a TBI has also come into the news because of the National Football League agreeing to a large dollar settlement with the players union and through the 2016 movie, “Concussion.”  TBI is also common in high school and college athletics and auto accidents.  As we age, the brain is also more vulnerable to TBI, so a simple fall in the house can result in a significant TBI.

It has taken a long time for mainstream medicine to recognize TBI, as indicated by the NFL situation.  There are many reasons for that including the fact people react differently, it is hard to quantify the extent of a head injury, and the symptoms can be quite varied.  Common symptoms are agitation, depression, explosiveness, and cognitive difficulties.

We diagnose TBI with a careful history, specific psychological tests, and by looking at the Brain Map, including the Traumatic Brain Injury Discriminant Analysis.  This is based on specific differences seen in the Quantitative EEG (Brain Map) of soldiers with known, well-documented head injuries.

Case Example:  A health middle-aged man came to see us because of agitation, depression, and impaired memory following a right brain stroke.  He had a previously unrecognized heart defect, which allowed a blood clot to go to his brain.  When the brain is injured, it shuts down to protect itself, but often, it does not all come back on line.  Brain injuries can also disrupt the very complex, frequency based communication, which is a part of normal brain functioning.  In this case, we used LENS Neurofeedback because it helps to activate the brain and restore normal rhythm.  Although he was only able to do a dozen sessions, he reported a dramatic and almost complete resolution of his symptoms after just a few treatments.

Case Example:  A 76-year-old divorced man had a history of serious stroke and multiple subsequent smaller strokes.  He was coming into the office every two weeks but then stopped coming and stopped answering his phone.  When I went by his house to check on him, he was disheveled, he shuffled to the door, his speech was somewhat garbled, and he said that he had had another stroke and was dying, he estimated within the next two weeks.  Since, as explained above, a stroke, like a traumatic head injury, can throw the brain out of its normal rhythm.  I gave him a LENS neurofeedback treatment on that visit.  I returned a week later and did another treatment.  When I returned two weeks, later, he was dramatically different.  He was dressed very neatly, had his hair nicely combed, and he was not only not depressed or thinking he was going to die, but said he wanted to return to church, which he had not attended in years, and he said he would like to meet some people and one day remarry.  So, he was dramatically better after just two LENS treatments.  I continued to treat him with LENS neurofeedback until his LENS maps returned to normal. 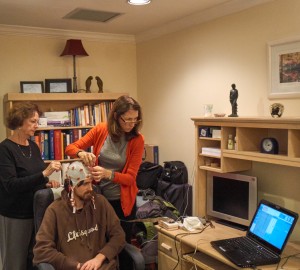 It is hard to imagine working in the mental health field without the aid of Brain Mapping, which is a Quantitative Electroencephalogram, big words, but not really so complicated.  Electroencephalogram merely means we are measuring brainwaves, just as an Electrocardiogram measures the electrical impulses generated by the contracting heart.  The Quantitative part just means we are accurately measuring or quantifying the brainwaves and they are compared against a Normative Database.  When you get your blood drawn, it is compared against normal values or a Normative Database.  We are doing the same thing.

The data from the Brain Map can be displayed as numbers or spectral displays but the common method is as a “Map,” which shows the levels of the brainwaves at different frequencies displayed across a representation of the head.

The following example of ADHD is a small portion of a Brain Map:

The white areas of the map are normal or the same as the Normative Database.  The colored areas show the distribution over the head of the brainwaves at the various frequencies.  Below each one is the scaling so you can tell if there is more or less of a particular frequency at a particular location.  For example, the above portion of the map shows that there is more 7 Hz or 7 cycles per second brainwaves in the orange and red areas.  7 Hz is slow and since it is in the front, this is consistent with classic ADHD.  The red area to the left is consistent with a tendency towards Depression.  With Neurofeedback, we can address both the Neurofeedback and the Depression.

At Holistic Health & Counseling Center, we also have the more advanced LORETA software, which allows us to “see” the brainwave pattern “within” the brain, just like a CT scan or MRI, although they show “structure” and the Brain Map show “function.” 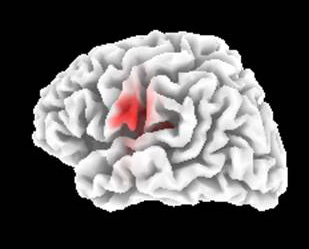 On the Brain Map, we can see patterns that are consistent with ADHD in its various forms, LD in its various forms, Anxiety in its various forms, Depression, Traumatic Brain Injury, Autism, Asperger’s and other problems.  Being able to “see” the functioning of the brain is invaluable in understanding presenting complaints and also invaluable in guiding treatment.  “A picture is worth a thousand words,” and the Brain Map is a tremendous help in understanding a person’s presenting complaints, and it gives us the information we need to know how to proceed with Neurofeedback.  It is also helpful in in follow-up to see if our Neurofeedback treatment was successful, because our goal is to normalize the EEG, and thus the brain functioning.

See the section of the website on ADHD and Learning Disabilities for additional information.